Shure Cleans Up Its Act - A Little Bit

In a previous post I reported that Shure was ignoring public safety use of TV channels 14-20 in making recommendations to their generally not legally eligible customers for their illegal use of UHF spectrum. A mutual acquaintance discussed this with Shure and reported back that it was an unintended software bug and that they had intended to warn the illegal users, i.e. their customers, to avoid public safety spectrum. He also reported that Shure would correct this specific problem.

The good news is that Shure has acted as promised. 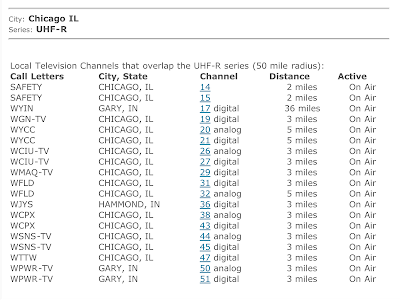 Shure's listing of Chicago UHF spectrum use in channels 14-51
Above is the latest data from Shure's "Wireless Frequency Finder". (See, who needs Chairman Martin and the FCC?) In the case of Chicago, channels 14 and 15 are clearly marked as used by "safety" just like 47 CFR 90.303 says. Perhaps APCO will give Shure an award for this support to public safety?

Indeed Shure goes beyond this if you look a little higher in the spectrum.

Shure's listing of Chicago UHF spectrum use in channels 29-69

Now Shure even advises this customers that channel 68 and 69 have been "reallocated for public safety". Shure also advises that US customers avoid purchasing "UA band" (782.125 - 805.750 MHz) systems although in 2004 they were hyping this band. (Let's ignore the issue that Canada will use the same public safety block as the US and there is no guidance for Canadian clients - Industry Canada will have to handle that one alone.)

Above is the current 700 MHz band plan. You can see why Shure's UA band is such a problem. Is Shure offering a deal to those who were tricked into buying them in recent years? But why the focus on channels 68 and 69? Note that there are 2 public safety blocks here in the former channels 62-64 and the former channels 67-69. Note also that the famous "D block" covers the remainder of channels 62 and 67 and, if the FCC ever resolves the auction issues of this band and public/private sharing, will carry public safety traffic at times of heavy load. Why are only 68 and 69 identified as worthy of special attention?

Oddly, on another part of its website Shure does say that "the FCC has reallocated four UHF TV channels for use by Public Safety stations" but doesn't mention what they are. Also, if D block is included there are 6 channels that will be used by public safety. But in any case, all wireless mics (legal and illegal) should be totally out of channels 51-69 by February!

A non-public safety issue I noticed in the Shure tables above deals with channel 55. Note that Shure does not identify any present TV use of it in Chicago. They're right! However, did Shure miss the news in Wikipedia that Qualcomm has a nationwide license on channel 55 for its MediaFLO service (which is resold to consumers under other names by AT&T and Verizon Wireless)? Qualcomm MediaFLO is secondary to TV stations until next February but is now operational in the cities listed below:

Note that MediaFLO is operational in Chicago on channel 55 as well as a lot of other cities. While it is secondary with respect to licensed TV stations, I am reasonably certain that it is primary with respect to noneligible/illegal users of their spectrum. It also is a potential source of interference to wireless microphones if they are near a transmitter site. (And wireless microphones are a potential source of interference to consumers using MediaFLO-based services.)

"for willfully and knowingly marketing and selling wireless microphones to unauthorized users for ineligible purposes in violation of Part 74, Subpart H, and for engaging in deceptive advertising practices designed to persuade ineligible users such as houses of worship, theaters, corporate event venues, and members of the general public that they could legally purchase and operate wireless microphones operating on vacant broadcast UHF Channels without a license and for purposes prohibited by the Commission;"

and to my recent FCC filing pointing out the CEPT, the European spectrum regulator, has proposed to move wireless microphones to an entirely new band as part of their digital transition.

As I have said before, wireless microphones are a legitimate use of spectrum and deserve more from FCC than benign neglect that allows most users only criminal spectrum squatting. I have advocate a responsible solution to this mess; PISC includes with their complaint a responsible proposal for solving the problem; but Shure seems to just demand the status quo. FCC is strangely silent on the wireless microphone issue other than considering offers of venues, many of which are illegal users, for Docket 04-186 testing of wireless microphone detection.

My client, Adaptrum, pragmatically also supports protection of wireless microphone users but has told FCC that a combination of safe harbors (for small users) and well placed beacons would be more effective than the passive detection advocated by other Docket 04-186 proponents.

In view of the great apparent interest in public safety at FCC it is amazing that no action has been taken on any of these points in the more than a month since the letter was sent.

Oddly, NPSTC did not address the issue I have raised about the legal ambiguity of wireless microphone use of land mobile spectrun in TV channels 14-20.
Posted by MJM at 3:54 PM

"Why are only 68 and 69 identified as worthy of special attention?"
Because no one at Shure who maintains the web site is paying close enough attention to the spectrum re-allocation. However, and in all fairness to a few of the Shure folks despite the company's boisterous protestations, their field technical people are in fact knowledgeable about the entire 700MHz re-allocation and do explain all the public safety and AWS assignments accurately when they do seminars and trade shows. They also advocate not purchasing any new equipment above 698MHz.

"But in any case, all wireless mics (legal and illegal) should be totally out of channels 51-69 by February!"
Until Part 74 is changed to prohibit BAS in 698-806MHz (and I do believe that should be the case), *and* while PS and AWS frequencies can be avoided - at least until full buildouts make that practically impossible - there's no reason to avoid that spectrum come February. Both AWS and PS frequencies can be looked up in the ULS and since Part 74 devices will suffer greater interference before any AWS or PS subscriber, we have the most to lose by staying there.

"A non-public safety issue I noticed in the Shure tables above deals with channel 55. Note that Shure does not identify any present TV use of it in Chicago. They're right! However, did Shure miss the news in Wikipedia that Qualcomm has a nationwide license on channel 55 for its MediaFLO service"
Again, it's only the website guys who are missing the boat; the field guys have this covered - Including the fact that Qualcomm is buying up channel 56 as well.

"PISC complaint that alleges that not only is Shure's customers' use of these frequencies illegal but that Shure itself is acting illegally "for willfully and knowingly marketing and selling wireless microphones to unauthorized users for ineligible purposes in violation of Part 74, Subpart H, and for engaging in deceptive advertising practices designed to persuade ineligible users such as houses of worship, theaters, corporate event venues, and members of the general public that they could legally purchase and operate wireless microphones operating on vacant broadcast UHF Channels without a license and for purposes prohibited by the Commission;"
Although I agree from a policy perspective with just about all of PISC's (and your) positions, here's the big problem with their complaint against Shure: *NO where* in the 47 CFR or 47 USC does it say a manufacturer can't market a type approved device to ineligible users. The entire regulation (PART 2 - FREQUENCY ALLOCATIONS AND RADIO TREATY MATTERS; GENERAL RULES AND Regulations; Subpart J Equipment Authorization Procedures; Sec. 2.927 Limitations on grants) reads:
"No person shall, in any advertising matter, brochure, etc., use or make reference to an *equipment authorization* in a deceptive or misleading manner or convey the impression that such equipment authorization reflects more than a Commission determination that the device or product has been shown to be capable of compliance with the applicable technical standards of the Commission's rules." See? it only talks about equipment authorizations, not eligibility. It's beholden upon the user to insure they obtain the proper licenses and use the equipment in accordance with that license and governing rules and regulations. Shure was/is not presenting their equipment as anything more than it is. PISC's Fleco reference illustrates this: Fleco Corp. was found to be marketing non-type approved equipment (and operating in the wrong band for its intended purpose).

In PISC's Monty Henry and Gain Saver references, both those cases were that of selling equipment for the sole purpose of unauthorized
interception of police RF signals for the purpose of committing a violation.

(See how bad PISC's argument on this point is; I'm actually in a position of defending Shure.)

So, let's come up with some realistic specifications, permissible operational parameters and user eligibility for beacons, couple that with properly implemented spectrum sensing (don't forget proper antenna design, and no manufacturer cheating), and I believe the entertainment industry will survive the near future.