In Docket 04-186 (TV Whitespace) the wireless microphone community has been making numerous complaints about how they can not be subject to any interference because they are such a vital service. Of course, the vast majority of present wireless microphone users are not eligible for licensed under Part 74, Subpart H so such use is actually a criminal violation of 47 USC 301. But setting that aside for the moment, let's see how responsible they have been. Below is a web page I downloaded for Shure's Wireless Frequency Finder website. I have made several annotations. 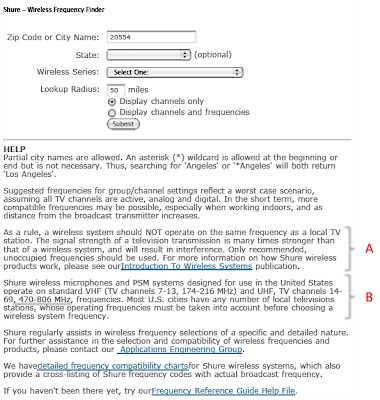 First, next to the letter A is the following quote:

"As a rule, a wireless system should NOT operate on the same frequency as a local TVstation. The signal strength of a television transmission is many times stronger than that of a wireless system, and will result in interference."

I note that "rule" is not capitalized, so I assume that Shure is not referring to FCC Rules. You see the reason you should not pick an active local TV channel is that you might get interference. Shure apparently isn't concerned that TV viewers might get interference. Shure also isn't concerned about interference to weak distant TV stations, the problem that MSTV keeps complaining about for the proposed white space devices. Why is MSTV so worried about cognitive radio-based WSDs and oblivious to the present illegal use of UHF spectrum by "dumb" wireless mics?

Next, near the letter B, we have the following quote,

470-806 MHz? Does that sound familiar? Doesn't that include the frequencies that FCC

just auctioned off for $19B and AT&T and Verizon expect to start using in 306 days? Doesn't it include blocks that have been allocated to public safety? Did Shure forget to tell its customers? Perhaps they didn't read the newspapers about the auction? What are their customers really expecting? When is Shure going to urge them to move out of these 700 MHz channels? Note that the whole tone of the "spectrum finder" is that users should listen to Shure and just ignore FCC and everyone else.

Then I entered the FCC's ZIP code, 20554, in the Shure "frequency finder" and asked for frequencies in the DC area. Here are the results:

Well at least Shure does not recommend the frequencies that have been auctioned. But wait, isn't there something special about channels 17 & 18 in the Washington DC area? Weren't they allocated for TV Land Mobile Sharing in Docket 18262 in the 1970s?

So I went to ULS and looked up the specific use of channels 17 and 18 in the DC area. Above is the list of 28 public safety agencies in the Washington area that use these frequencies. Did Shure ask them if it was OK for illegal nonlicensed users in a band subject to mandatory licensing to share their frequencies?

How could Shure have missed that? If Shure thinks sharing with public safety is so easy, why don't they file a petition and see what APCO thinks about it?

I have written previously that wireless microphones are a legitimate use of spectrum and that FCC should accommodate them in some way, but not necessarily with the same obsolescent technology forever and not necessarily in the same valuable spectrum that they use inefficiently (in terms of time and space availability) if they exclude all others. But the wireless microphone crowd should start acting responsibly first, not just urging their customers to squat on all sorts of frequencies including public safety frequencies.

Considering the lawless, reckless nature this group has shown, it is amazing that established trade groups like CTIA, NAB, and MSTV are all pandering to them. Normally these groups protect their own interests by stressing the need for compliance with FCC regulations, not explicitly condoning violations of them.
Posted by MJM at 5:48 PM

There is of course no argument that the vast majority of wireless mic/IEM/IFB/coms use is without a license and thus illegal, and that this situation should be addressed in a responsible manner. Further, I've never been a fan of the manufacturers' web site "frequency finder" tools for the very reasons you illustrate; they don't know how to properly account for terrain, HAAT, EIRP, contour and distance characteristics associated with a TV transmitter, and LMR T band operations. Going directly to the FCC's Media TV Query and the ULS databases is far more informative and reliable, and something I advocate strongly to my colleagues and those who are willing to listen and learn.

That said, there are a few comments made which I feel bear clarification . . .
"Shure apparently isn't concerned that TV viewers might get interference. Shure also isn't concerned about interference to weak distant TV stations, the problem that MSTV keeps complaining about for the proposed white space devices. Why is MSTV so worried about cognitive radio-based WSDs and oblivious to the present illegal use of UHF spectrum by "dumb" wireless mics?"
The *vast* majority of wireless mic/IEM/IFB/coms use is low power and in convention centers, theaters, concert halls, stadiums, arenas, TV studios and other commercial locations that are far enough from consumer TV receivers as to not cause any interference. How many interference complaints filed at the FCC can you find?

""Shure wireless microphones and PSM systems designed for use in the United States operate on standard VHF (TV channels 7-13, 174-216 MHz) and UHF, TV channels 14-69, 470-806 MHz, frequencies."470-806 MHz? Does that sound familiar? Doesn't that include the frequencies that FCC
[Photo]just auctioned off for $19B and AT&T and Verizon expect to start using in 306 days? Doesn't it include blocks that have been allocated to public safety? Did Shure forget to tell its customers? . . . When is Shure going to urge them to move out of these 700 MHz channels?"
First, wireless mics, etc. without question have until February 17th 2009 to operate in the 698-806MHz spectrum (licensing not withstanding). Second, as of right now, there seems to be *no* indication from the FCC that Part 74 BAS devices must vacate this spectrum in February, save for a couple of declaratory statements made in 1998 and 1999 (though I suspect this will change once the auction winners who just shelled out many billions of dollars complain strongly along with the PS sector).

Further, we in the entertainment and corporate production community, are already transitioning away from 698-806MHz simply because we know we won't be able to operate effectively with high power mobile and broadband transmitters, be they PS or AWS. Additionally, Shure has either ceased production or has issued an end of life notice on all bandsplits above 698MHz, as have most manufacturers selling in the US market. It is a shame Shure does not keep their Frequency Finder portion of the website more informative and up to date.

"Normally these groups protect their own interests by stressing the need for compliance with FCC regulations, not explicitly condoning violations of them."
Ahhh, but they *are* protecting their own interests; they are some of the biggest users of wireless mics/coms/IFBs/IEMs or purchasers of content made with wireless devices.

Mike, I have the greatest respect for your technical and regulatory knowledge, experience and understanding; it's the real world application and environment of Part 74 BAS devices that I'd look forward to showing you more of in depth.

In your graphic of Shure's frequency finder results, you indicate that "Shure recommends TV channels 17 & 18." This is somewhat misleading as the "Recommended Channels" do not actually refer to TV channels, but rather they refer to Shure-defined frequencies within a Shure-defined Group and Band. In the product user guide for the UHF-R receiver, Shure defines Band G1, Group 10, Channels 17 and 18 to be 494.225 and 495.775 MHz, both of which are in TV Channel 18. However, the user guide also includes a chart that instructs the user to avoid TV Channels 17 and 18 in the Washington, D.C. area and specifically mentions avoiding Group 10 Channels 15-21. Also, as of 7/2008 the Shure frequency finder seems to have been updated to exclude these frequencies.

Nice post you got here. It would be great to read more concerning this theme. The only thing I would like to see here is a few pictures of any gadgets.
Jeff Kripke
Cell phone jammers