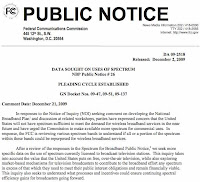 and that we have to close that dialogue down"- Blair Levin, FCC

Reacting surprisingly quickly to your blogger's suggestion in his comments to the Wireless Innovation Inquiry, Docket 09-157, FCC issued yesterday a public notice cryptically entitled "Data Sought on Uses of Spectrum".  A key question tells what is going on here:


FCC is now actually asking for the benefits of over-the-air television!  What happened to the good old days when NAB, AT&T, and the "major mobile (equipment) manufacturer" controlled all aspects of FCC policy among them?

Para. 54 (of the Spectrum Innovation NOI) seeks comment on “innovations in the use of renewable energy and other green technology to makes wireless networks more energy efficient or address other environmental concerns.” At the risk of saying the obvious, the TV broadcast band uses a large amount of electric power to transmit RF signals that are actually received by an ever decreasing number of subscribers. The main apparent need for these transmitters is to guarantee to broadcast licensees “must carry” status with CATV systems. The use of electric power and the RF occupancy appears to be mainly a byproduct of this desired endgoal that gives 90+% of the viewership of licensed TV broadcasters. While over-the- air broadcasting gives consumers access to broadcast signals at no marginal cost compared to the pricing of MVDS service, policy options exist to offer basic MVDS service as comparable cost. For example, part of fees from new users utilizing former TV spectrum could be used to finance “lifeline” MVDS service.

MSS has no objection to giving present TV broadcasters long term must carry status, but questions why this must be accompanied with the waste of electric power and squatting on spectrum to deny it to others. While it is not possible under present law to let broadcasters keep must carry status without transmitting largely “unreceived” signals, MSS urges the Commission to explore and make recommendations to Congress for giving TV broadcasters incentives to cease using large amounts of electric power and cease filling spectrum with largely unwatched signals while retaining today’s must carry rights.


No broadcaster commented directly on this point, although MSTV and NAB in joint reply comments of November 5 (28 days ago) chose to mischaracterize it - no doubt to avoid addressing the point in question.   In a footnote, the giants of the broadcasting industry said


Apparently, NAB and MSTV's attempt to take this issue off the field of consideration has backfired. The PN has questions like


3.    What would be the impact to the U.S. economy and public welfare if the coverage of free over- the-air broadcast television was diminished to accommodate a repacking of stations to recover spectrum?


There may be opportunities for broadcasters to share 6 MHz channels in a market without significantly disrupting the free over-the-air television service that consumers enjoy today. Stations sharing channels may be able to trade capacity (in Mbps) between or among themselves. We note that the number of broadcasting stations sharing a single 6 MHz channel would affect the number and type of signals that each can broadcast.

[The last quote deals with something not widely known in the US: In the UK, most DTV TV broadcasts use shared transmitters owned and operated by a nonbroadcaster, Arqiva.  These transmitters send 4 SDTV signals in 1 TV channel.  UK broadcasters, e.g. US citizen Rupert Murdoch, produce programming and sell advertising, but do not have the equivalent of Part 73 licenses.  FCC seems tobe asking whether this could be done here.  With present technology is it not possible to multiplex several HDTV programs, particularly sports with lots of motion, on a single transmitter.]

CTIA was clearly pleased with the PN.  They previously said the US faced a "spectrum crisis unless significant additional spectrum was allocated for licensed CMRS".   The day of the PN, CTIA, CEA, and " more than 100 of America' most innovative companies" sent a letter to FCC saying


“Our nation's ability to lead the world in innovation and technology is threatened by the lack of sufficient spectrum available for wireless broadband applications and services. As the Chairman has said, there is a looming spectrum crisis. We applaud your candid acknowledgment of this fact and appreciate your efforts to close the spectrum gap.

“A veritable revolution is underway in which consumers and businesses rely on laptops, increasingly sophisticated smartphones, and other wireless devices to access bandwidth-intensive applications, content and services. This has led to an explosion in innovation, technological improvements, job creation, productivity and consumer welfare gains. It will also create a real strain on the nation's Internet infrastructure. Without more spectrum, America's global leadership in innovation and technology is threatened.

“The undersigned urge you to allocate more spectrum for wireless broadband as soon as possible. Please let us know how we can help.”


"Broadband deployment to unserved areas is a worthy goal, and broadcasters believe we can help the FCC accomplish its mission without stifling growth opportunities of free and local TV stations and the millions of viewers that we serve. We would hope policymakers would remember that after spending $15 billion upgrading to the next generation of television, broadcasters just returned to the government more than a quarter of the spectrum used for free and local TV service."

Let's Make a Deal:
Broadcasters, Mobile Broadband,
and a Market in Spectrum

12/4/09 NY Times has an article on yet another aspect of declining use of over-the-air TV signals. It starts with an amusing anecdote of how a broadcasting mogul could not convince her own daughter to take a TV set to college because the daughter would rather use IP video:

Web-TV Divide Is Back in Focus With NBC Sale


As she prepared her daughter for college, Anne Sweeney insisted that a television be among the dorm room accessories.


“Mom, you don’t understand. I don’t need it,” her 19-year-old responded, saying she could watch whatever she wanted on her computer, at no charge.

That flustered Ms. Sweeney, who happens to be the president of the Disney-ABC Television Group.


“You’re going to have a television if I have to nail it to your wall,” she told her daughter, according to comments she made at a Reuters event this week. “You have to have one.”

But she does not, actually.