I have written previously, in April 2008 and August 2007, on the lack of enforcement at FCC on equipment marketing that is subject to Section 302 of the Communications Act.

I think you make some good points about enforcement. The problem is this is an area that is very easy to ignore even with the best of intentions. And, unfortunately, as you note, once devices are out there – you can’t fix the problem.

PS. By the way, you suggest that trade organizations should lobby for enforcement – broadcasters have done just that in the XM and Sirius FM modulator cases. Despite, egregious violations (some devices were over the limit by 45 dB) , it should be noted that not one device was recalled from consumers. (In fact, the FCC quietly permitted a change the way these devices are tested - allowing manufacturers to test in an automobile and to use the shielding of the metal car body for compliance.)

He was talking about the blatant sale by XM and Sirius of satellite receivers for cars with built-in FM transmitters so they could be heard over the normal car radio without any wire connections. NAB alleged that many of such receivers exceed Part 15 emission limits by 6-10 dB raising potential interfere issues at nearby cars in traffic. This behavior, along with parallel allegations that XM and Sirius built terrestrial "fill in" stations for their satellite signals in excess of what FCC authorized, was bizarre for corporations holding billion plus dollar FCC licenses since under the RKO precedent they could be found "to lack the requisite character" to be an FCC licensee and made to forfeit all licenses.

Now most equipment manufacturers and distributors are not major FCC licensees and need not fear the RKO case precedent. But in theory, FCC has lots of remedies to enforce its rules from fines to requests for court injunctions and equipment seizures. It appears that FCC continues to follow the example of Lord Nelson who raised his telescope to his blind eye during the Battle of Copenhagen so that he would not see an order he disagreed with.

It appears that FCC avoided making a finding on the XM and Sirius allegations until their merger made it impossible to ignore. Then FCC signed consent orders with XM and Sirius obligating them to make "voluntary payments" to the Treasury of $17,394,375 and $2,200,000, respectfully. One wonders if this would ever had been resolved had not the merger been forcing the issue?

More recently, FCC has announced a "citation" to The Spy Store, Inc., dated 7/31/09. This firm was selling a GPS jammer! While the ads have disappeared, a trace of them available through Google indicates the marketing pitch was "Our GPS Blocker protects you from GPS vehicle trackers!" While some cheating spouses might want such a unit to enable their liaison travel in the family car, another class of users for such technology would be criminal trying to frustrate policy surveillance.

In any case, it is hard to imagine a more clearly illegal as well as antisocial product!
So what did FCC do about it? Below is a calendar of events derived from the FCC citation: 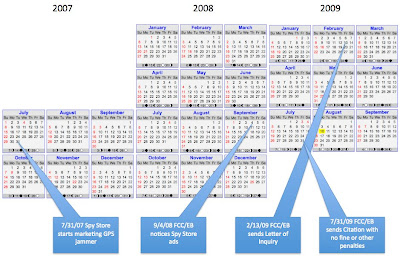 It took FCC more than 13 months to realize these devices were being sold, despite a large web presence by the firm and multiple retail stores. One of these is close to the former FCC building at 1919 M St., NW and a casual visitor could quickly realize the equipment not meeting FCC rules were being sold. Then it took 5 months more before FCC sent a Letter of Inquiry to the firm. 5 months later, FCC closed the case with a citation threatening fines if there were repeated occurrences. (Now it is possible FCC acted slowly in this instance because another law enforcement agency with a parallel investigation asked them to do so. I doubt it based on other instances, but it is possible.)

I have dealt in the past with NTIA and IRAC and continue to deal with them on issues of mutual interest. They generally do not fully trust FCC to keep its word on spectrum sharing and mutual interference issues and this type of slow enforcement motion on a band of great importance to them is likely to rejustify their reluctance to share spectrum with FCC regulatees on reasonable terms. Since about 2/3 of the spectrum is either exclusive federal government or shared, this could have a huge impact on FCC regulatees seeking more sharing of generally lightly used federal spectrum.

NAB and MSTV repeatedly stated in Docket 04-186 (TV whitespace) comments that they think FCC will not enforce any whitespace sharing rules adopted. (This is is ironic since a key player in one of these organizations is an FCC veteran who took an active role in discouraging marketing enforcement while at FCC.)

The likely cause of the delay in this enforcement case is probably the micromanagement style of the previous chairman. Senior FCC staff were afraid to take any action, even action for which they had legally delegated authority, without a go ahead from the Chairman's Office, which, of course, was snowed under by other micromanagement issues. There are signals that the new team is trying to clarify these issues and what managers can do without direct approval.

Meanwhile, outsiders can not demand an accounting of the delays in this type of enforcement case. But I hope the 8th Floor and oversight committees do ask the staff to explain how this happened and prevent future occurrences so FCC rule enforcement becomes credible and all policy options can be considered.
==========
A observation on the FCC citation. It starts,

"This is an official CITATION, issued pursuant to Section 503(b)(5) of the Communications Act of 1934, as amended (“Act”), to The Spy Store, Inc. (“Spy Store”) for marketing in the United States unauthorized
radio frequency devices in violation of Section 302(b) of the Act,2and Sections 2.803 and 15.205(a) of the Commission’s Rules (“Rules”), and importing radio frequency devices without filing FCC Form 740 (or the electronic equivalent) with the United States Customs and Border Patrol in violation of Section 2.1203 of the Rules." (Emphasis added.)