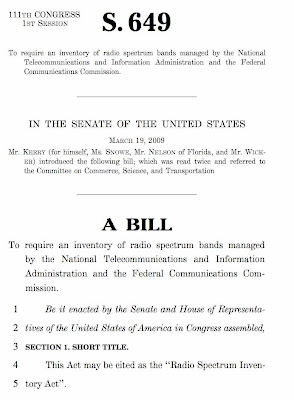 
BroadbandCensus.com reports that The Senate Commerce Committee on Wednesday approved S. 649, the Radio Spectrum Inventory Act, which would give the NTIA and FCC 180 days to present Congress with a complete inventory of the radio frequencies that they manage from 300 Megahertz to 3.5 Gigahertz.

The key provision of the bill is a new Section 342 of the Communications Act that would read:

(a) Radio Spectrum Inventory- Not later than 180 days after the date of enactment of this section, and biennially thereafter, the National Telecommunications and Information Administration and the Federal Communications Commission, in consultation with the Office of Science and Technology, shall carry out each of the following activities:

(1) Conduct a report that includes an inventory of each radio spectrum band, from 300 Megahertz to 3.5 Gigahertz, managed by each such agency. Such report shall include--

(A) the licenses or government user assigned in the band;

(B) the total spectrum allocation, by band, of each licensee or government user (in percentage terms and in sum);

(D) if such information is available--

(i) the type of intentional radiators operating in the band;

(ii) the type of unlicensed intentional radiators authorized to operate in the band;

(iii) contour maps that illustrate signal coverage and strength; and

(iv) the approximate geo-location of base stations or fixed transmitters.

CTIA immediately applauded this event. Not surprising since the Center for Responsive Politics reports that the following organizations are formally lobbying for this bill:

I believe that more information on spectrum use is a long needed idea. My former FCC colleague, Paul Kolodzy, used to say during the Spectrum Policy Task Force/SPTF deliberations that the US spends more counting agricultural production like corn and cattle than spectrum even though spectrum continues more to the GDP.

But let us look at the current bill and what it proposes to be accomplished in 6 months. For the FCC, (a)(1)(A) and (a)(1)(B) are already done and have been for decades. (a)(1)(C) involves information that is not presently available at FCC on end user equipment. How many mobiles units does police department x or taxi company y have? Note that to make the job of the CTIA membership easier, they no longer even report cell site information to FCC. So at FCC (a)(1)(C) will require a massive new data collection, often involving small businesses which hold radio licenses. Then we have radios that are "licensed by rule" such as boat and aircraft radios on noncommercial units. FCC doesn't even know who these "licensees" are, so counting them will be a real challenge. (Should we mention the wireless mic issue at UHF where 90% of the users are unlicensed and illegal under present rules?)

Now in the case of NTIA much of the information is available in classified databases. The bill tries to deal with this in (b):

(b) National Security Exemption- A licensee or government user of spectrum may petition the Commission or the National Telecommunications and Information Administration for a partial or total exemption from inclusion on the website and in the report required by subsection (a). Such an exemption may be granted only to the extent that each such agency determines that disclosure of such information would be harmful to the national security of the United States. The licensee or government user seeking an exemption under this subsection bears the burden of justifying the exemption and shall provide clear and convincing evidence to support such an exemption. Any such exemption shall apply only for 2 years and shall expire upon the end of such 2-year period unless the licensee or government user seeks and obtains an extension in accordance with this subsection. Any information that is excluded from public disclosure pursuant to this subsection shall still be compiled and reported to the Committees of Congress described in subsection (a)(4) on a confidential basis.

Those of us use to how things work can images a huge paper pushing exercise at NTIA on how much could be declassified. Considering this problem has built up over decades, it is unlikely it will be resolved in 6 months.

CTIA and mainstream spectrum players such as broadcasters have consistently fought against FCC trying to elaborate on the current ambiguous definition of harmful interference. As "haves" and insiders the current ambiguities give them an upper hand where each issue is resolved in intensive 8th Floor lobbying. They do not want transparency.

Another topic opposed by mainstream spectrum users is receiver standards. (Note that in this context, "standards" need not mean regulation but could mean minimum performance before one is entitled to protection.) Although it is not obvious to newcomers, it is well known in the spectrum field that "most spectrum is used by receivers not transmitters". So if and when the "inventory" is finished, we will all get into a new set of massive arguments about whether a proposed new spectrum use will cause "harmful interference" to some population of receivers that has some unknown immunity to nearby signals, adjacent channel signals, signals capable of causing receiver-generated intermodulation, etc.

Finally, in the case of NTIA-controlled (Federal) Government spectrum, how do you decide if some could be used for new private uses? NTIA control is more nominal than real since in reality the NTIA management can not order more power agencies to spend their own money. This is the natural consequence of the moves by Presidents Nixon and Carter to move the Section 305 power of the President out of the White House to the Commerce Department and create NTIA. The present NTIA structure is just not up to the job.

Congressionally mandated reallocations, e.g. 47 USC 923, could be tried again, but they have long term costs in creating a more hostile atmosphere between FCC and the IRAC members who really control most of the spectrum management decisions in the federal government. I believe that these previous actions poisoned the atmosphere and made NTIA/IRAC drag heir feet on other issues and probably stimulated FAA's unsuccessful endrun on both FCC and NTIA.

So my bottom line is that the spectrum inventory will have little net success, other than employing K Street lawyers, unless it is accompanied by at least some progress in: