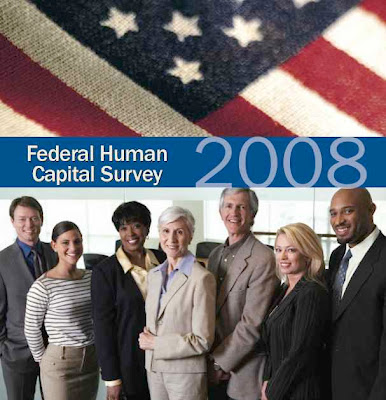 FCC Morale:
A Review of New Data from OPM

The Federal Human Capital Survey is an admirable Bush Administration initiative that OPM describes as,

"a tool that measures employees' perceptions of whether, and to what extent, conditions characterizing successful organizations are present in their agencies. Survey results provide valuable insight into the challenges agency leaders face in ensuring the Federal Government has an effective civilian workforce and how well they are responding."

As I wrote 2 years ago, the FCC has used its status as an independent agency to opt out of participation in the past even though other independent agencies did participate. (This year as last time, the Nuclear Regulatory Commission (NRC) got very high marks in the survey. The obscure Court Services and Offender Supervision Agency, a new agency that is smaller than FCC, also ranked in the top 10 agencies in job satisfaction. So the survey was not biased against independent agencies or small agencies.)

The first 3 questions above show that FCC employees are more satisfied with their own work group and immediate supervisors than federal employees in general. However, the bottom group of questions shows major negative feelings about top management and the agency as a whole. Clearly FCC employees have a lack of respect for "senior leaders" and doubts about their "standards of honesty and integrity."

I hope that the new leaders of FCC will review this report carefully and formulate a plan to turn the situation around quickly.

* Methodology: the numbers shown are the sums of the data from the OPM report in the "Strongly Agree" and "Agree" columns.
Posted by MJM at 11:37 AM

The data is skewed positive. For 8 years, and certainly the last 4 under martain, the martian administration has waged war on the FCC staff. His quip about the KGB atmosphere of the FCC made no one laugh bc it was true. Staff has responsibility removed. Staff was moth balled. Staff was beat up by middle management. Management became an insane moving ball of whatever answer MArtian wanted. So I point to three factors that skew this data positive (1) the staff was so beat up that a lot staff left - indeed some of the best staff that had opportunity elsewhere took that opportunity. (2) MArtian brought in a lot of his own staff (someone do a foia of how many FOX people have worked for Martian). (3) The FCC has not participated in this survey for so long that no one took it seriously when it was announced again and (4) there was a lot of retribution inside the FCC. Look the wrong way, and get assigned to the consumer bureau. So people did NOTHING NOTHING that would put them at risk. The Martian / Bush / Cheneys came in declaring that they did not believe in civil servant. And they proved it. Their incumpetence during KAtrina showed how they ruined FEMA. And the telecom broadband disaster we face shows how they ruined the FCC.