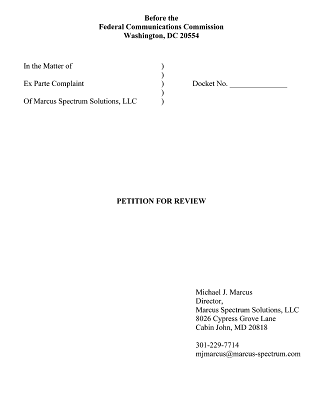 
“I believe that transparency is best achieved through the creation and publication of clear rules. However, for the regulatory regime to be successful, these rules must also be strictly enforced. Based on personal experience, I know that the U.S. regulatory model has only been successful when the FCC has enforced its rules vigorously. Failure to enforce rules sends the inappropriate signal that companies may engage in anticompetitive behavior or other unlawful conduct with impunity.” -- Remarks of Commissioner Kathleen Q. Abernathy, Market Reform: A Tool for Achieving Universal Access Panel, ITU Global Symposium for Regulators. Geneva, Switzerland, December 8, 2003

A petition recently filed by your blogger's consulting operation asks the full FCC to review a decision by its Office of General Counsel (OGC) rejecting several ex parte complaints that dealt with late filed documents that also appeared to lack the detail about an oral meeting required by the FCC's ex parte rules:
Careful readers will recall that this issue started with a posting here almost 2 years ago in October 2006. The posting was the text of a letter to OGC pointing out that while NAB has a meticulous record of detailed timely filings of oral contact with FCC on ongoing rulemakings, MSTV appeared to be a serial violator of the 47 CFR 1.1206(b)(2) requirements with respect to both timeliness and detail. OGC finally got around to answering this letter more than 5 months later without addressing the specifics of the 16 MSTV filings listed that appeared to violate the rules. A later OGC letter explained the absence of any statement on these specific allegations stating,

“We understood your October 13, 2006 letter to express general concern about the enforcement of ex parte rules, with the particular meetings cited merely being examples.”

OGC has now rejected several subsequent ex parte complaints dealing with different later MSTV filings on grounds such as,
Perhaps these would be good policies, perhaps not. In any case they are policies that are embodied neither in the Commission’s regulations nor in its past decisions (let alone court decisions) nor even in advisory information on its website.

It is amusing to note that on the very day OGC both rejected the MSS complaint and discouraged MSS from filing future ones, MSTV made a late filing in CS Docket No. 98-120 in which they took the unusual step of "fuzzifying" the date of the actual meeting by referring to it as "Thursday" and not giving the actual date.

As far as I can tell, the last time FCC has even chastised anyone on late filed somments was in 2002. There is no evidence I can find that FCC has ever taken action under §1.1216 to punish in any way any party for repeated violations of ex parte rules. While the vast majority of ex parte filings at FCC are compliant, repeated violations by one party that escape even a warning letter may, in the words of Comm. Abernathy, send "the inappropriate signal that companies may engage in anticompetitive behavior or other unlawful conduct with impunity."

Readers are encouraged to form their own opinions of the issue here and contact FCC with their own thoughts. At present no docket number has been established for this issue and it is not anticipated that public comment will be requested. This also means that there is no online access via ECFS for information on this proceeding. However, I will post links to any documents I receive. Alternatively, readers may just respond to this posting on the link below.

Procedurally, the MSS petition is now a "restricted proceeding" and the rules of 47 CFR 1.1208 apply. In the off chance that FCC might enforce this section more than it enforces §1206, those communicating to FCC on this issue are advised to serve MSTV per §1208.
===============
ECFS-like Log of Documents on Petition