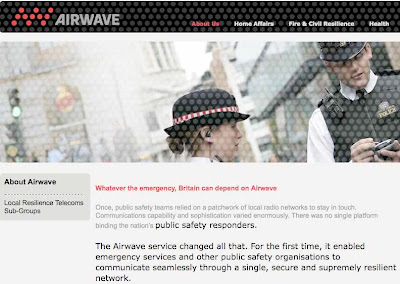 O2 Airwave Service:
Achieving Public Safety Interoperability in UK
The US has a huge public safety interoperability problem and has known about it for a long time. FCC has announced a "First Responders Summit" on April 20, 2007 to address the issue. But the root cause of the problem is simple: the US has thousands of independent public safety organizations which are independently funded by local governments and feel that they can independently select their own uniforms, guns, and radio systems. Time and time again the FCC has seen that throwing more spectrum at public safety makes interoperability worse, not better, if you don't exert real leadership.
I spoke in London last week at a meeting. I was reminded about how they have addressed this issue. At present there are about 50 independent regional police forces in UK, probably being reduced to about a dozen in the next few years. As a result of leadership from the Home Office and Ofcom (and its predecessor) they all use one communications systems that is centrally managed: the O2 Airwave system. (O2 is the cellular operator that sprang out of the former British Telecom - the traditional monopoly telco in UK.)

Now Airwave uses TETRA technology, a European development that has been so vilified by APCO and Motorola over the past decade that no one could seriously consider it for use in the US. Anyway, like APCO-25 it is rather dated now anyway. Any new system started now should probably be IP-based.

My point here is not the desirability of TETRA but rather the strategy the UK used to implement nationwide interoperability: Spectrum was made available for the system, a competitive contract with detailed requirements was issued, and the police agencies were told to migrate. Now in the US "Washington" can't tell local police to migrate to anything, but you can make it very advantageous by giving financial support only to agencies that do the right thing.

The UK precedent recognizes that governments have trouble with financing initial startup costs but can buy services on a recurring basis. Thus O2 financed the system and had no trouble raising the money based on long term service contracts.

For more information on Airwave also see Police Information Technology Organisation which is the UK government body that contracts with O2 for the system.