Think You Can Do a
Better Job at
Spectrum Policy
Than the Guys at FCC?

It isn't often that FCC is hiring technical people, but the announcement above (click on it to get to the site) shows there is a rare window of opportunity for both entry level hiring and 2 senior spectrum policy positions. The top part is for entry level engineers (GS 05 though 09; $34,139-$63,681 p.a. both in Washington DC and in smaller enforcement offices around the country.

The second and third items are for two senior technical managers in my old stomping ground, the Office of Engineering and Technology (OET) (GS-15 $115,317-149,000). This is for a division chief and a branch chief in the Electromagnetic Compatibility Division. See chart below: 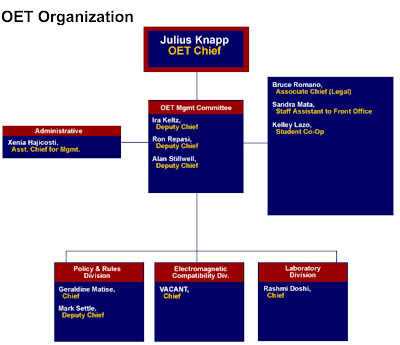 So here's your chance to show you can help out!

I urge other blogs and publications to reprint this information. The entry level applications are needed by 4/23/08 the senior OET jobs by 4/30/08.

(Of course, many observers will note that this is a stupid time of the year to start hiring entry level people as the college year is almost over and most good students have already accepted jobs. Thus the pool to look at is already biased towards the bottom by the start time. This has been customary practice at FCC in recent years as no one wants to commit to entry level recruiting until the budget situation is all settled and that is usually March or April. Wake up! The FCC has been around since 1934 and has almost certainly hired at least 10 engineers almost every year since then. To get good people you have to start recruiting in the Fall and plan on a few campus trips in the Fall. Postponing such recruiting until late spring has long term negative consequences especially when it happens year after year.)
Posted by MJM at 8:39 AM

Well, instead of hiring a lot more new young blood, how about figuring out some ways to keep the talent? With so many almost-fraudulent behaviors allowed at FCC, it's hard to find people who aren't disenfranchised while working there day in and day out. What does FCC do when they lose highly talented people due to this precise reason? Hire people who don't know better! Thanks KMART! (Kevin Martin) The FCC job page might as well serve as the blue light special!